Typing on the phone has become an everyday task that has successfully replaced the physical keyboards from a decade ago.

Be it Android smartphones or iPhones, onscreen keyboards are essential in using the phone.

When typing, the format plays a significant role in conveying your text.

For instance, on a computer, you can use keyboard shortcuts like Cmd + B and Ctrl + I to bold, italicize, or underline text. But many users don’t know how to achieve this formatting on your iPhone.

Italics is a format type that tends to make all the difference when typing your text.

You can italicize titles of books, emphasize a particular word, or use it to format your notes.

Apple still doesn’t allow users to use italics in messages — I have listed the crucial apps where you can use this format to emphasize your text.

How to Italicize on iPhone

Italicizing words present minor differences in the various apps, but putting them to use is easier than you might think. Here’s how you can do it.

Italicize text on Mail on iPhone

This method can be used on any mail app, not just Apple’s default offering.

Step 1: Launch the Mail app of your choice and create a new message by clicking on a plus icon.

Step 2: Type your text into the body of the email.

Step 3: Long press to select the word you want to italicize and click on ‘Format.’

The text is now in italics.

Italicize text on Notes on iPhone

Notes is a text-based app, so formatting is at the core of it. Let’s see how to italicize text on Notes:

Step 1: Open the Notes app and create a note.

Step 2: Type your text into the note and select the word you want to italicize. Now click on ‘Format.’

The text is now in italics.

You can also italicize words in Notes by clicking on ‘Aa.’

Italicize text on Pages on iPhone

Pages is a powerful word processor, so it’s a given that formatting can be done quickly.

Step 1: Launch the Pages app and create a blank document by tapping on the ‘+’ button at the top right corner. 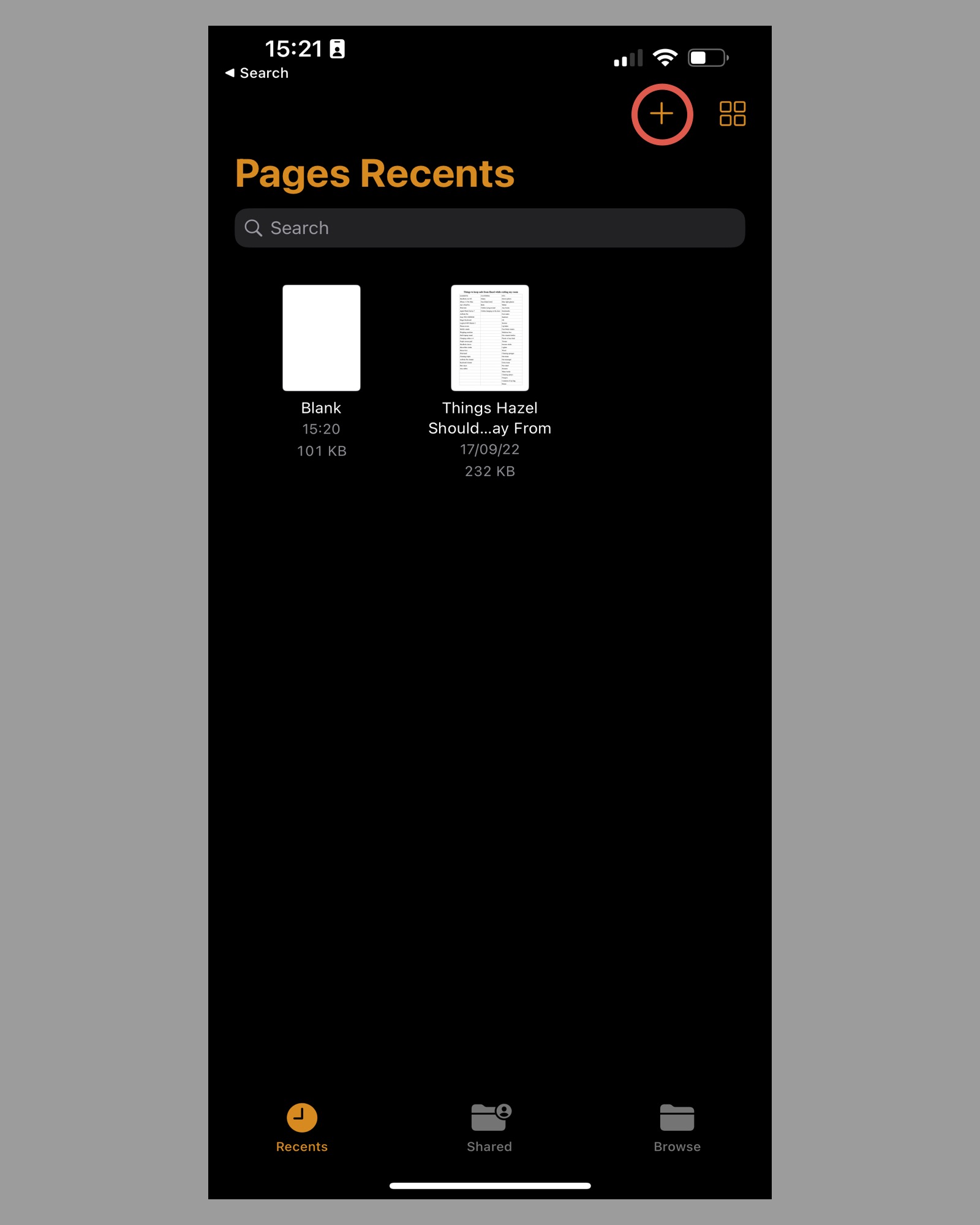 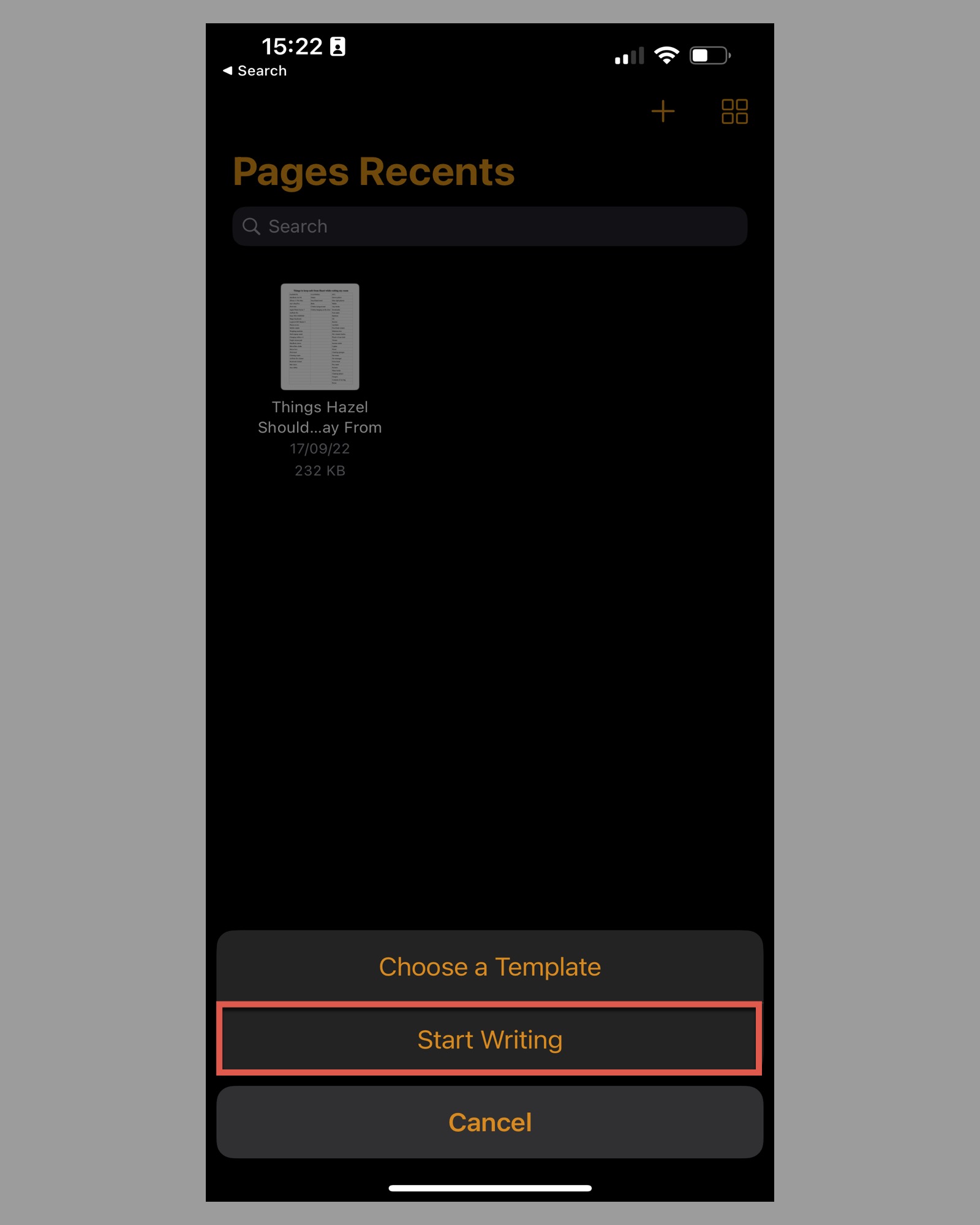 Step 3: A blank document will open. Type some text into a document. 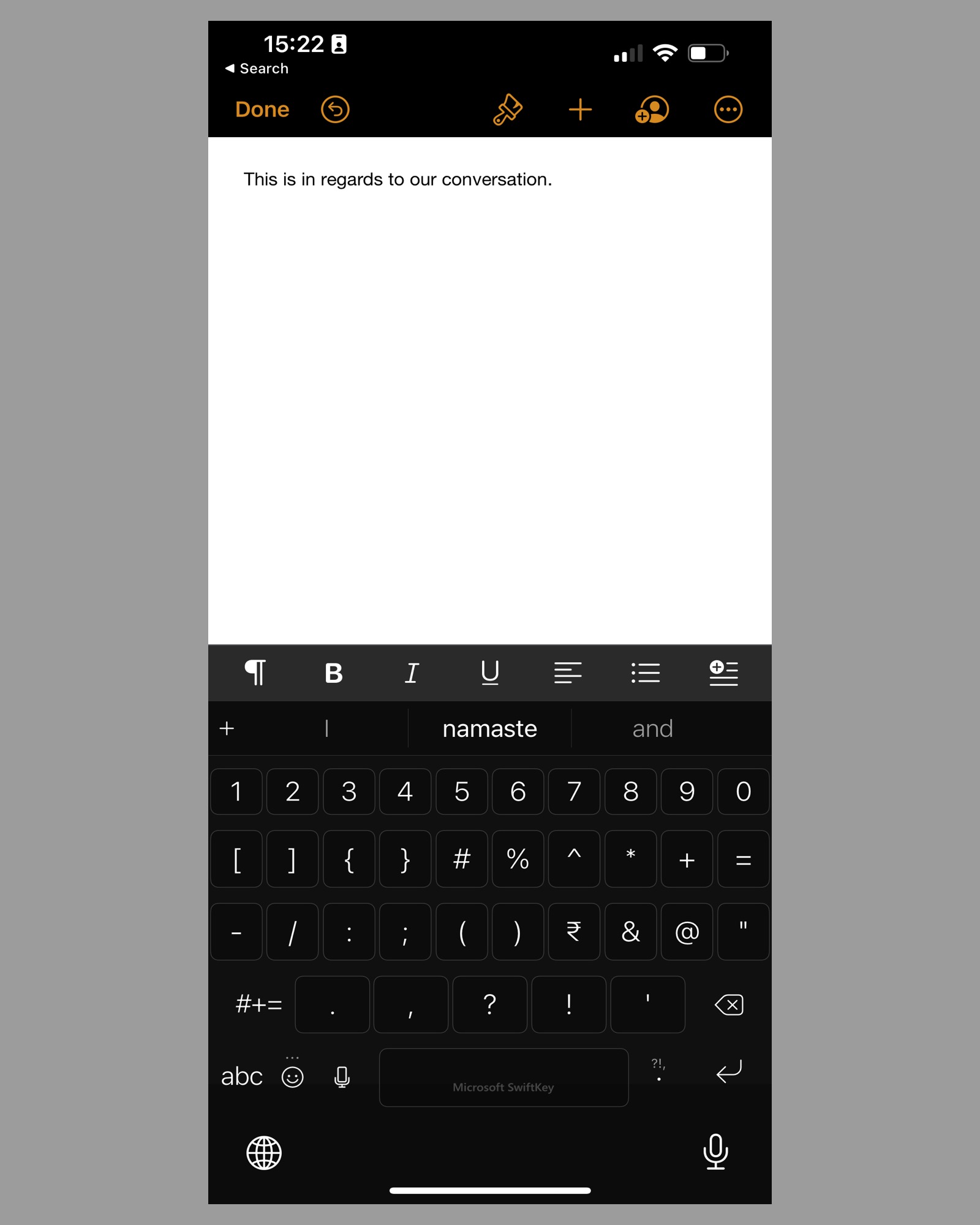 Step 4: Select the word you want to italicize by double-tapping the word. Now tap on ‘Format.’ 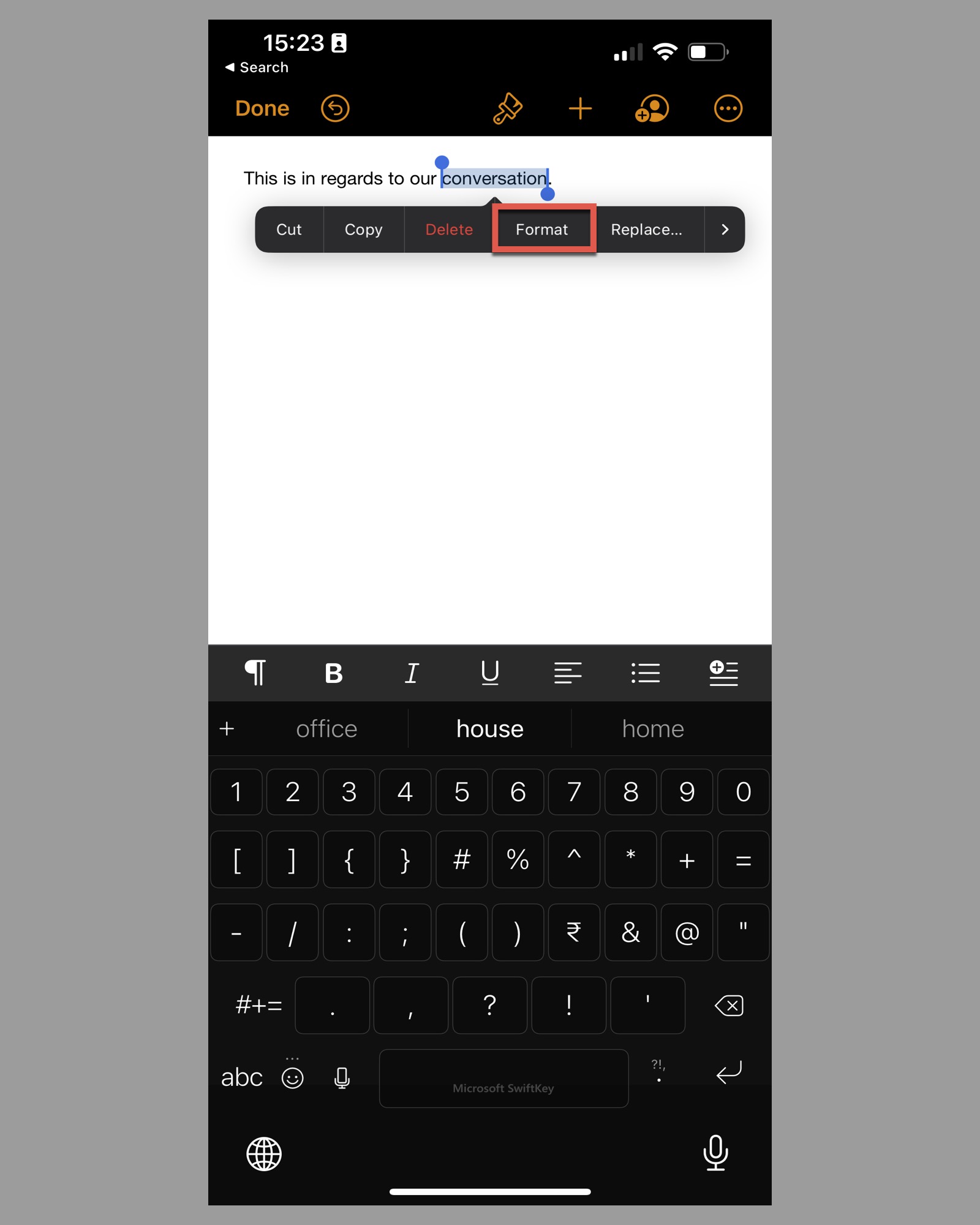 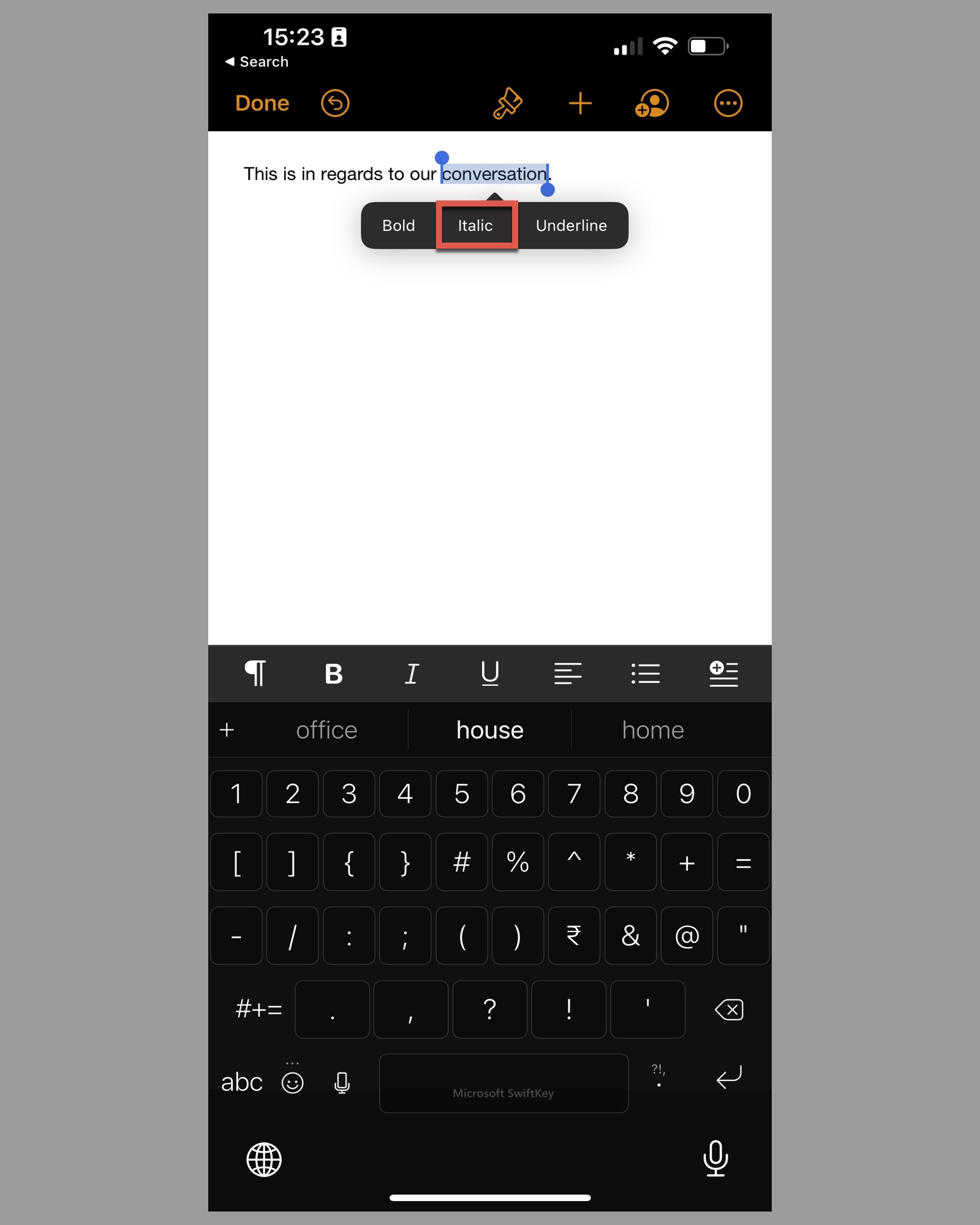 Step 6: There’s an alternate way: a) You can click the ‘I’ on the toolbar above your keyboard. 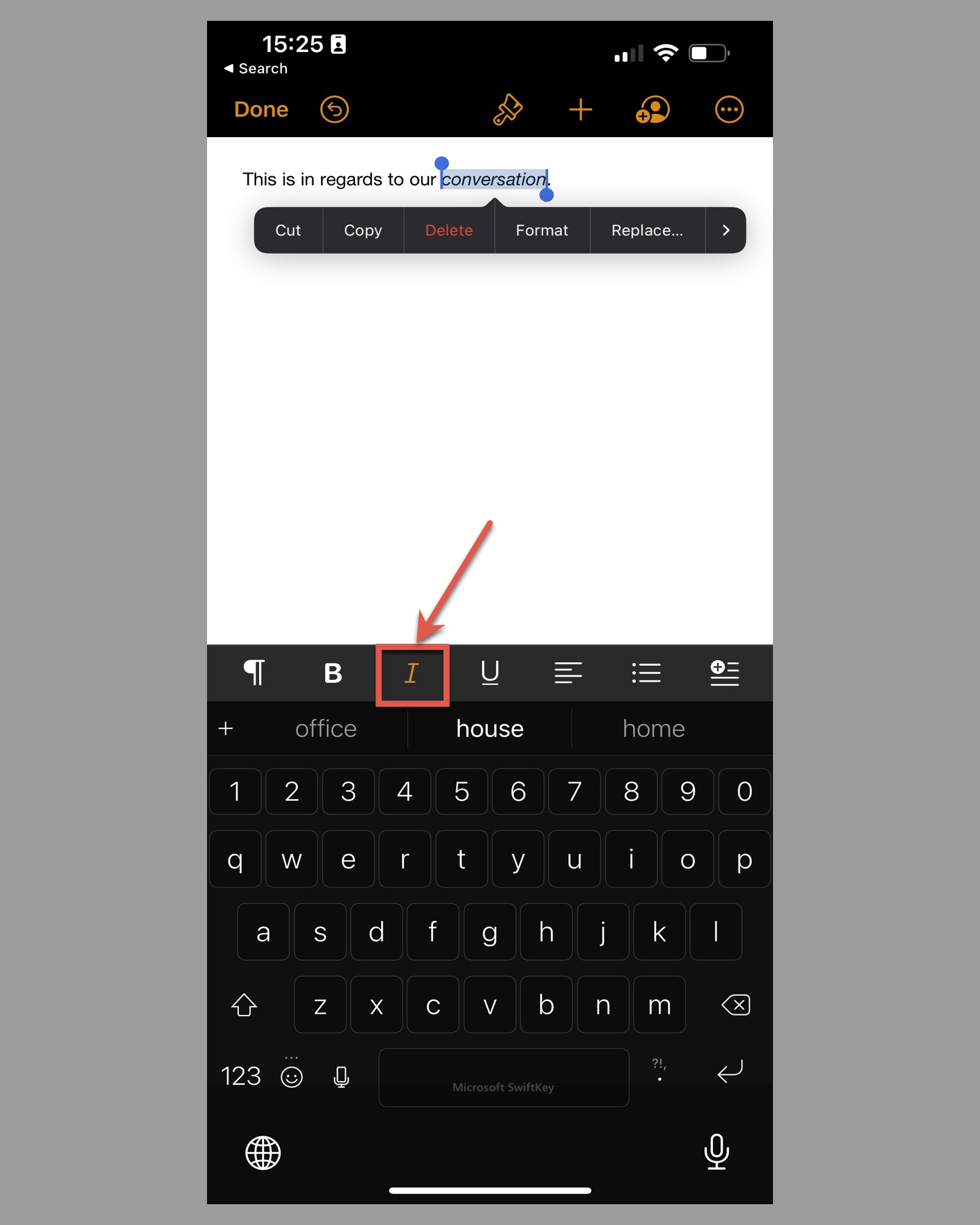 b) Click on the paintbrush icon at the top of your screen. Here you’ll see a detailed list of formatting options. Tap on ‘I.’ to italicize. 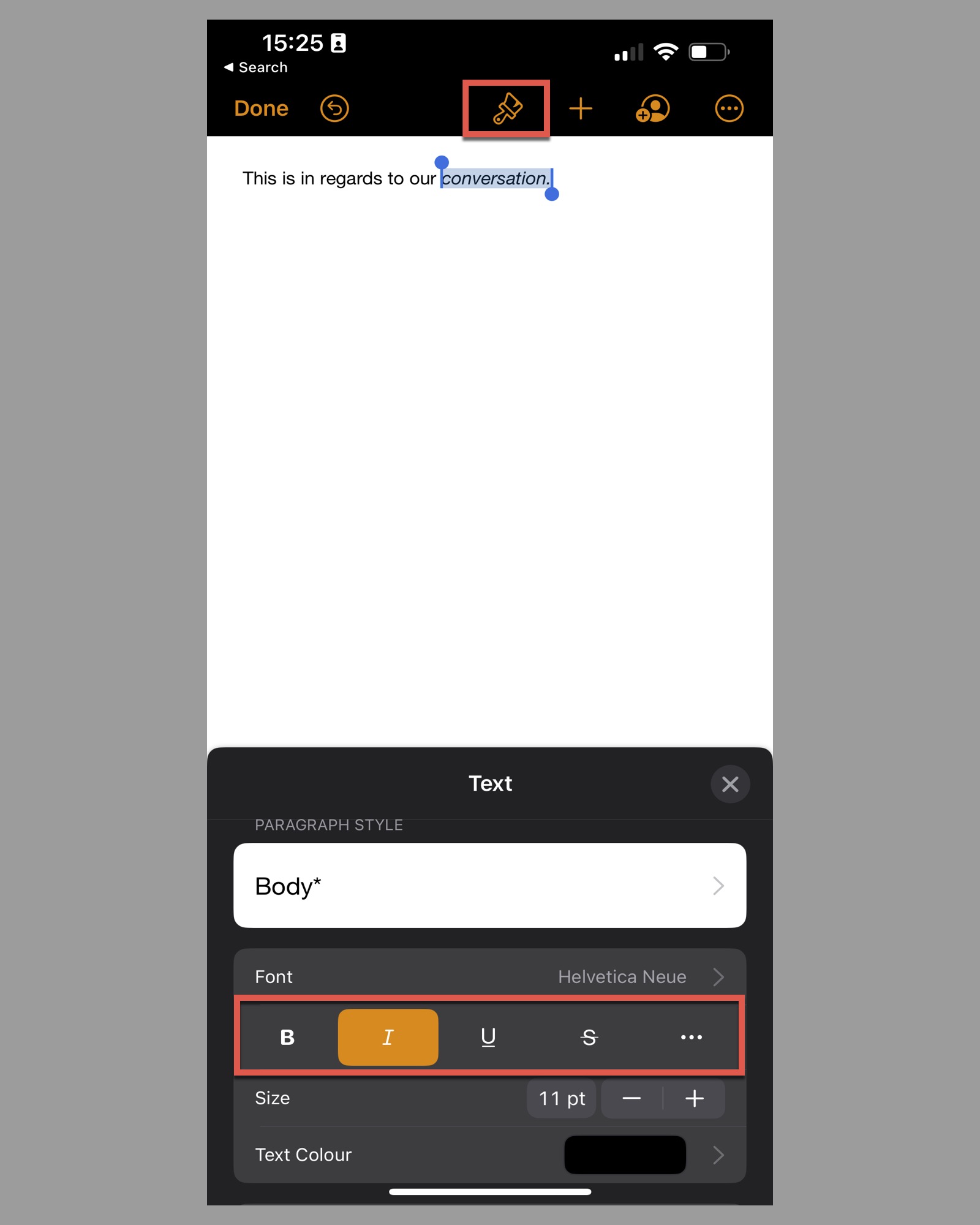 Italicize text on Reminders on iPhone

Text formatting is not limited to text-based apps or documents that can be shared; you can also apply italics to text inside Apple’s Reminders app in a similar manner as above.

Step 1: Open the Reminders app and create a new reminder or select an existing one. 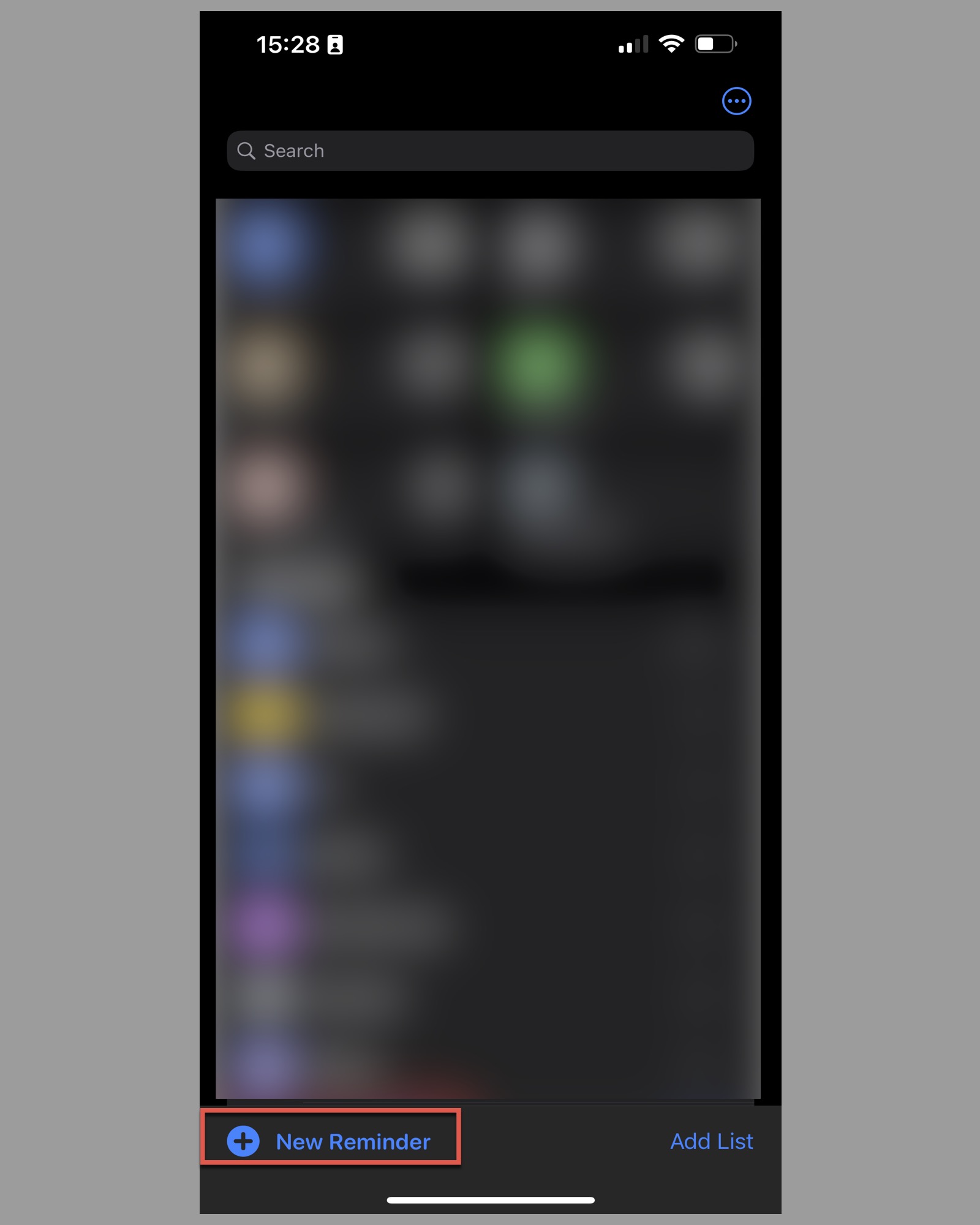 Step 2: Type a text in the title box and the notes section. 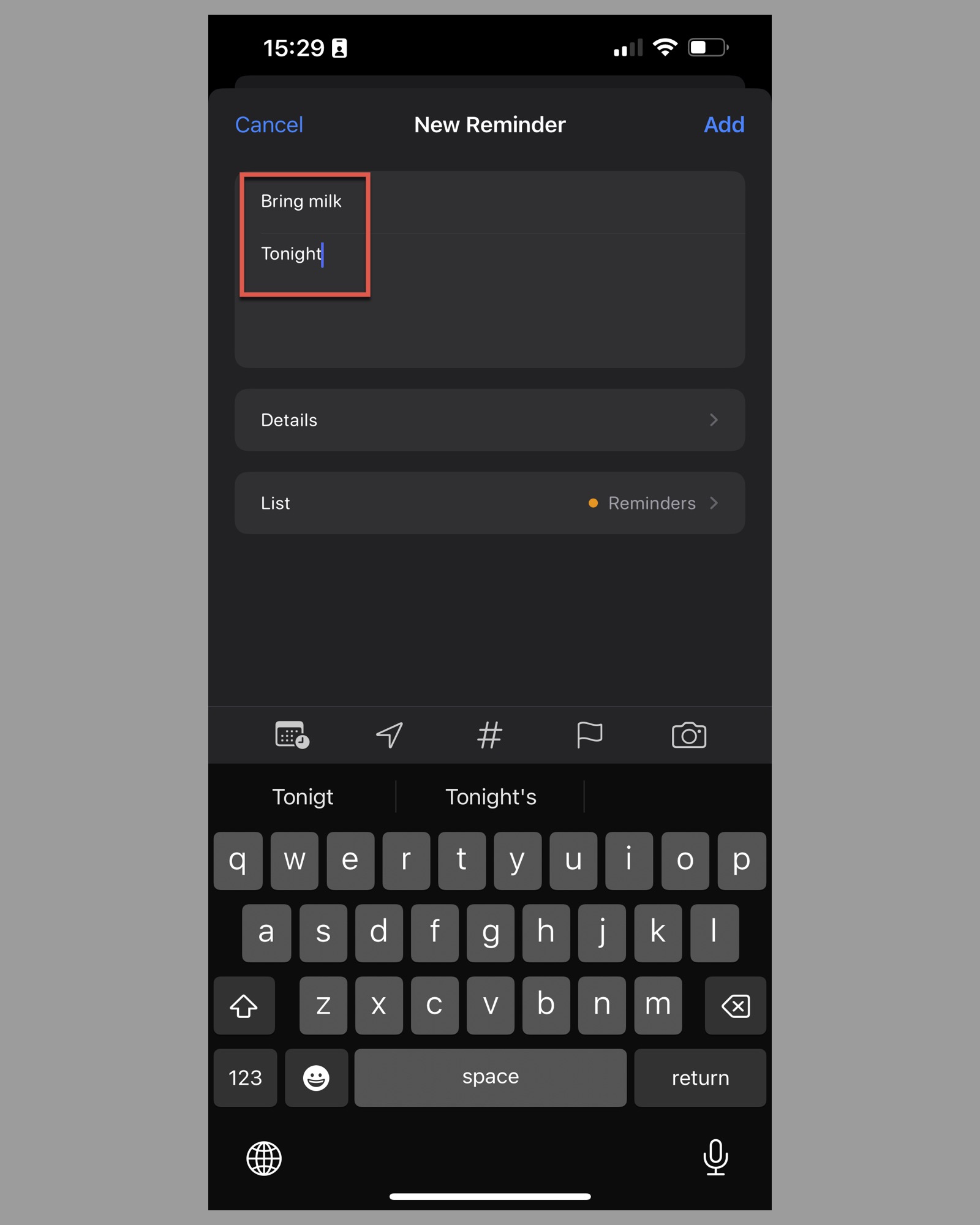 Step 3: Select the text below the title and tap on ‘Format.’ 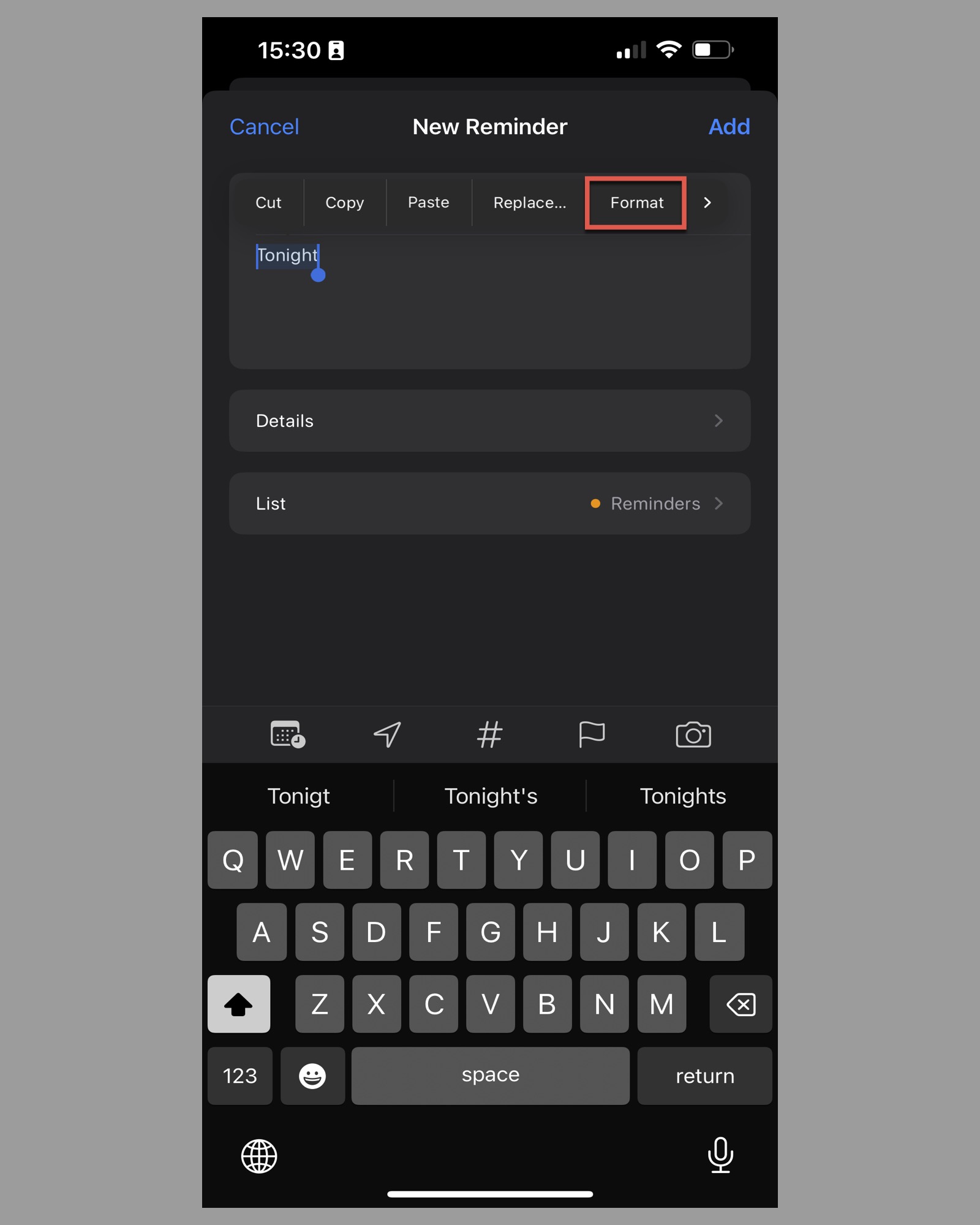 Step 4: Click on ‘Italic.’ You can explore more options if you want.

The selected text is now italicized.

Italicize text on WhatsApp on iPhone

WhatsApp is a powerful messaging app that allows you to format the text inside your messages. You can use it as you need to see that you can’t disable this feature.

Step 3: To italicize your message, place an underscore on both sides of the text, like this _ilovemyiPhone_

How do I write in italics on my iPhone?

You can use italics quite easily on your iPhone. Follow the steps mentioned above for any app, and you’ll be able to italicize any text. You can tap on any text-based app with three fingers to invoke Apple’s formatting options.

Can you use italics on your iPhone?

Yes, you use italics on many applications; the messages app isn’t one of them. You can format text in Mail, Notes, Reminders, Pages, WhatsApp, and more.

Is Bold text better on iPhone?

It is a subjective choice. I tried it on my iPhone, and I wouldn’t say I liked it. The bolding of the fonts can make the text more legible to many users, making just about all text on the screen easier to read for many iPhone and iPad users. But using the Bold Text setting won’t impact the text on websites.

This is how you can italicize texts on iPhone in different applications.

Editing text on a computer is an easy task, and all you need to do is select the text and then use the CMD or CTRL + B, I, or U.

The main challenge is achieving the same on an app on your iPhone.

All apps are designed differently, but the process of formatting texts is almost similar.

Don’t try this on Apple’s Message app, as it simply doesn’t support it. But any other text-based will have formatting options.

People commonly use italics for contrast or emphasis, highlighting a particular text part.